In tennis history there is one legend which has performed shoulder to shoulder with tennis greats like Pete Sampras, Jimmy Connors, Jim Courier, Stefan Edberg, Chris Evert, Manuela Maleeva and Even the Roger Federer. You must be scratching your head by now that how could you miss the name of such a big tennis star. Its none other than Wilson Pro Staff Racket.

This racket and its various versions have appeared in the hands of many famous players in the grand slam finals for last 5 decades. So, as you have the basic idea about what we are going to discuss about in this article let’s address the most frequently asked questions before we deep dive into the technical review:

When was Wilson Pro Staff released?

The 1st version of the racket was developed and debuted in the year 1983. Almost instantly the top players started liking the Pro Staff’s unique carbon and aramid fibers double braid which delivered a perfect combination of power, feel and control. The rest is history, thanks to this racket carbon fiber became the most important element in the performance tennis rackets.

Pro Staff 97 version of the racket introduced two most important editions of the rackets. First time the racket head size was increased to 97” from traditional 90” or 95”. Second, the debut of RF97 signature model. Roger Federer used this racket for his career before and after this milestone launch. He has used 3 different tennis head sizes throughout his career 85”, 90” & 97”.

Whose autograph is featured on Wilson Pro Staff 97 racket?

We hope that by now you already know the answer of this question. This version of the racket features the most coveted autograph of Roger Federer himself.

So, as we have already covered the most FAQs let’s deep dive in to the technical of the latest launch of Version 13 of the racket know as Pro Staff RF97, 97L and 97UL. We will breakdown our review into two parts. The first part will explain you about the construction of the racket and the other one is more on characteristics of the racket when you play various shots with it.

With their latest addition to the Pro Staff collection, Wilson is paying tribute to its very first carbon fiber-based performance racquet, the Pro Staff 85 that came out in 1983. From styling point of view, the original Pro Staff had a black frame with red and yellow pinstripes, a wide 16×18 string pattern. The modern version has a similar paint job with smaller pinstripes, but a slightly larger head with a denser 16 x 19 string bed, and an ergonomic butt cap. 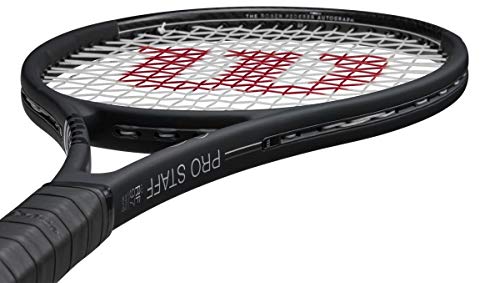 This update to the classic Pro Staff Graphite and Kevlar braid arranges the braid fibers at 45-degree angles, allowing the braid to “breathe” more upon impact. The result is an enhanced pocketing feel combined with incredible stability.

The Pro Staff 97 v13 also benefits from Wilson’s String Mapping technology, which creates denser spacing in the hitting area for a more predictable and controlled response. A denser string bed delivers unmatched precision and feel across the racket face.

Here we would like to answer another one of the most popular FAQ:

What is the best Wilson tennis string for a Pro Staff 97? 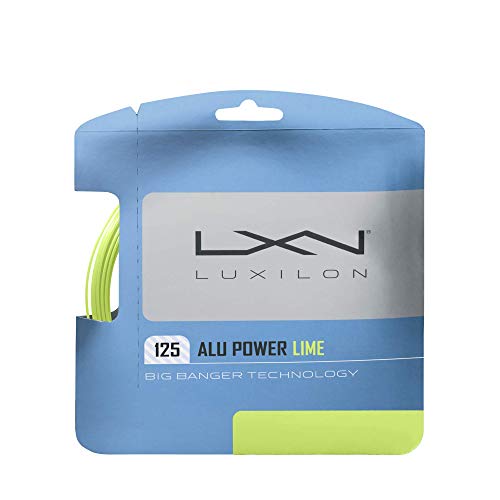 Wilson’s Perimeter Weighting System (PWS), which places extra weight at three and nine o’clock is an old magic formula on the racquet’s head to reduce twisting and improve stability. The thirteenth generation,Pro Staff 97 retains this part of the formula, which gives the head a unique style statement.

The Pro Staff 97 V13 maintains it’s higher-end weight, significant head light balance, and relatively thinner beam, all of which combine with the technologies mentioned above to produce a feel that’s unique to this family of racquets.

Though you can play a very good tennis without knowing these details however as it’s a product review so we have to publish these as well. But we promise you that if you are able to understand the impact of these numbers on your game then definitely you are an ATP 100 material. So, here are the Nerdy technical specs of the racket:

Boys and girls, when you take out this racket from the box at that very instant you will realize the power this racket has. And then, there is the style statement — matte black accented with small red and yellow pinstriped markings. It’s like the original Pro Staff 85 but with a more modern vibe. We all have to accept it’s a pro racket and not a beginner’s racket you need a lot of practice to reach the finesse you are looking from this racket. Let’s understand how this racket behaves while hitting various shots:

At hefty weight of 340g this racket needs a player with good strength and technique to deliver the effective and consistent results. If you’re an advanced player hunting for more control, this racket is a dream come true for your groundstrokes. The shot swing character of this racket is sensational and when the stars align, you’ll experience a consistency of depth and pace without parallel.

Advanced players are going to love this Wilson stick – a true “players” frame which allows you to take huge cuts at the ball and keep it fizzing down inside the court!Speaking of fizz, access to spin is surprisingly effortless considering the racket’s beefy swingweight.

You will need some solid technique to unlock this, so beginning players will find it punishing initially so be readyto devote enough time and practice to tame this racket

This racket will make you a sniper on the court. You just have to aim and shoot at the target. This racket gives you an exceptional level of precision possible in the universe of tennis racket. However, everything doesn’t come all positives you need good strength and technique to make this racket deliver the desired results.

As much of volleying is about having stability from the racket and being able to control power and that’s perhaps the Pro Staff’s defining characteristic. From the back of the court, it felt like you had the ball under your spell and it’s exactly the same thing at the net. If you have the Wilson Pro Staff 97 v13 in your hand you will feel the urge to get your volleys out that bit more often. If you’re not a great volleyer that’s probably not a great idea, but for those players for whom attacking the net is a big part of their game this racket is beautiful. The only weaknesses is the maneuverability – it’s a little sluggish, but if you’re confident in your strokes that’s not a problem.

Let’s admit this racket is not for everyone. This racket possesses the power to kill your game or take you to the next level. Though it’s strange to end a positive review with a caution note but our readers deserve to know about the warnings as well which come along with this racket. Many people buy this racket just to follow their tennis role models. Please don’t do that!

If you’re an aspiring teenager, it’s probably the great man, Federer. For those of the older generation, it could be Steffi Graf or “Pistol” Pete Sampras and his leaded up log of racket!Beware. You might well find this kills your tennis as well as your body if your game isn’t suitable for such a heavy, advanced level racket.

Let’s conclude, it’s one of the best rackets out there in the tennis universe and you’re going to absolutely love the Wilson Autograph IF you’re a good level player in excellent physical shape and plenty of your own, natural power, but craving more control, love to serve and volley too.

Lokesh Joshi has 4+ Years of experience in playing tennis. He has won two prizes in the regional tournaments. He is a passionate follower of the latest updates in the tennis universe and continuously works upon improving his game.